Larval Food Plants: Capparis arborea and other Capparis species
This butterfly can be found over much of Australia where various species of its foodplant occur. ​ 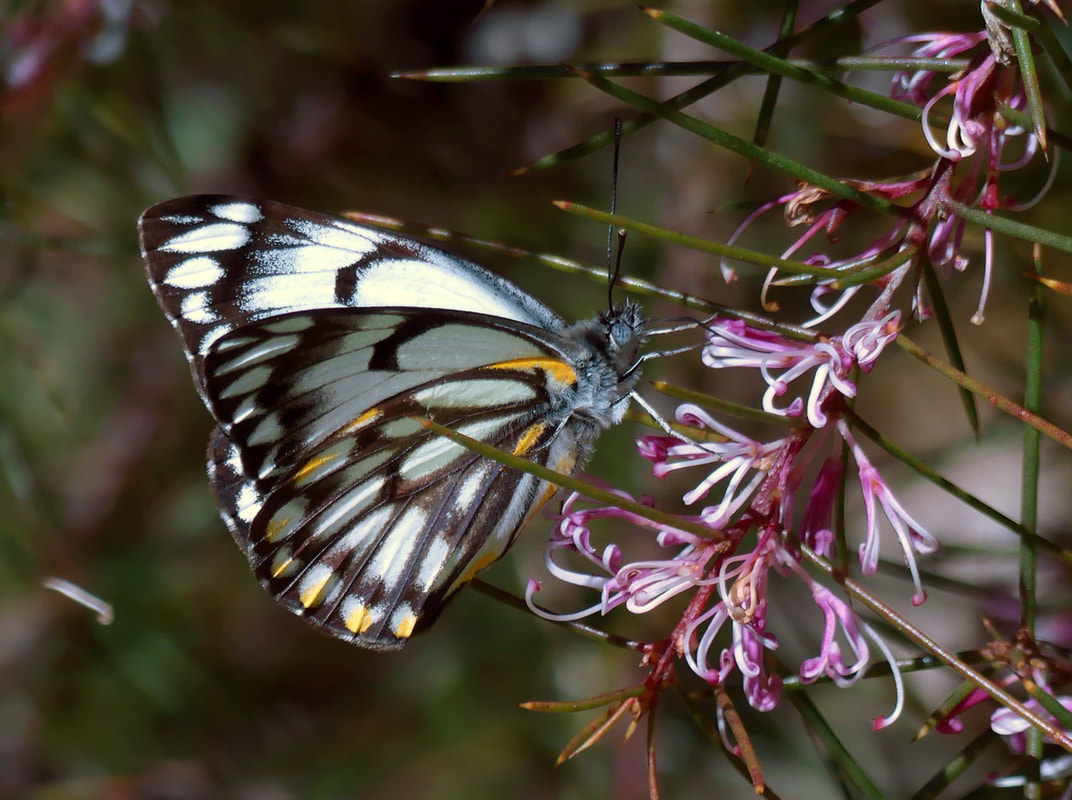 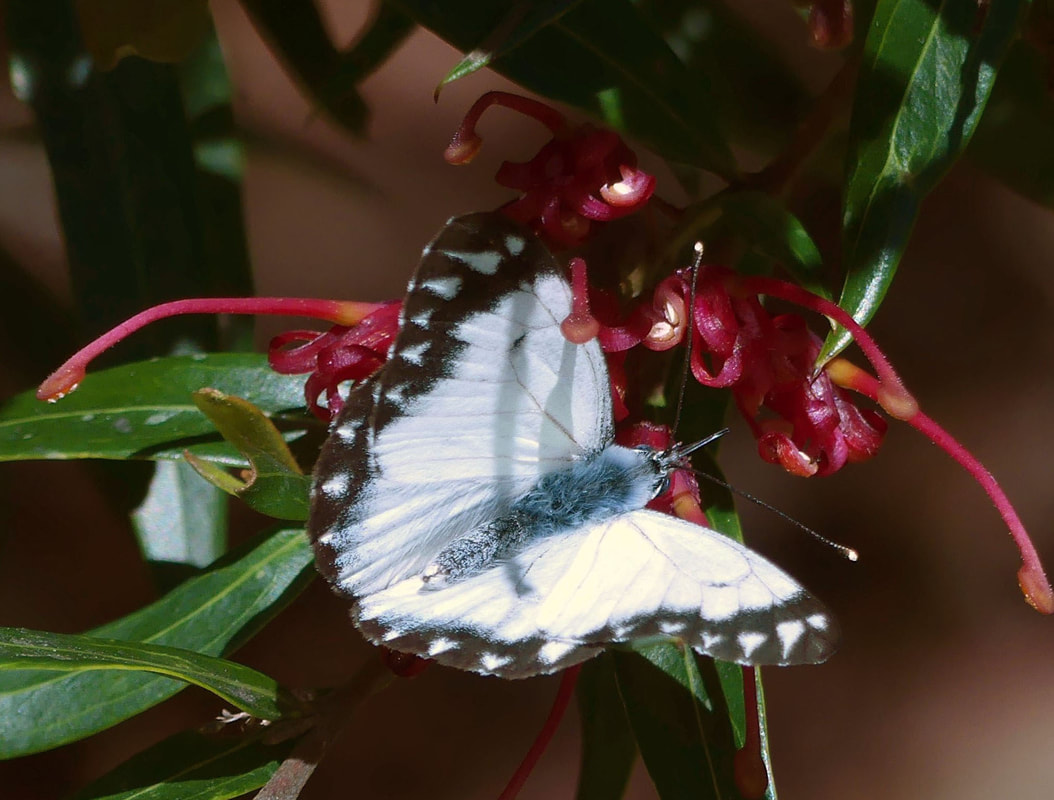 Another male - it is the first butterfly we've seen feeding on our Grevilleas, Claire Cottage, Dorrigo Plateau, 16 Aug 2019 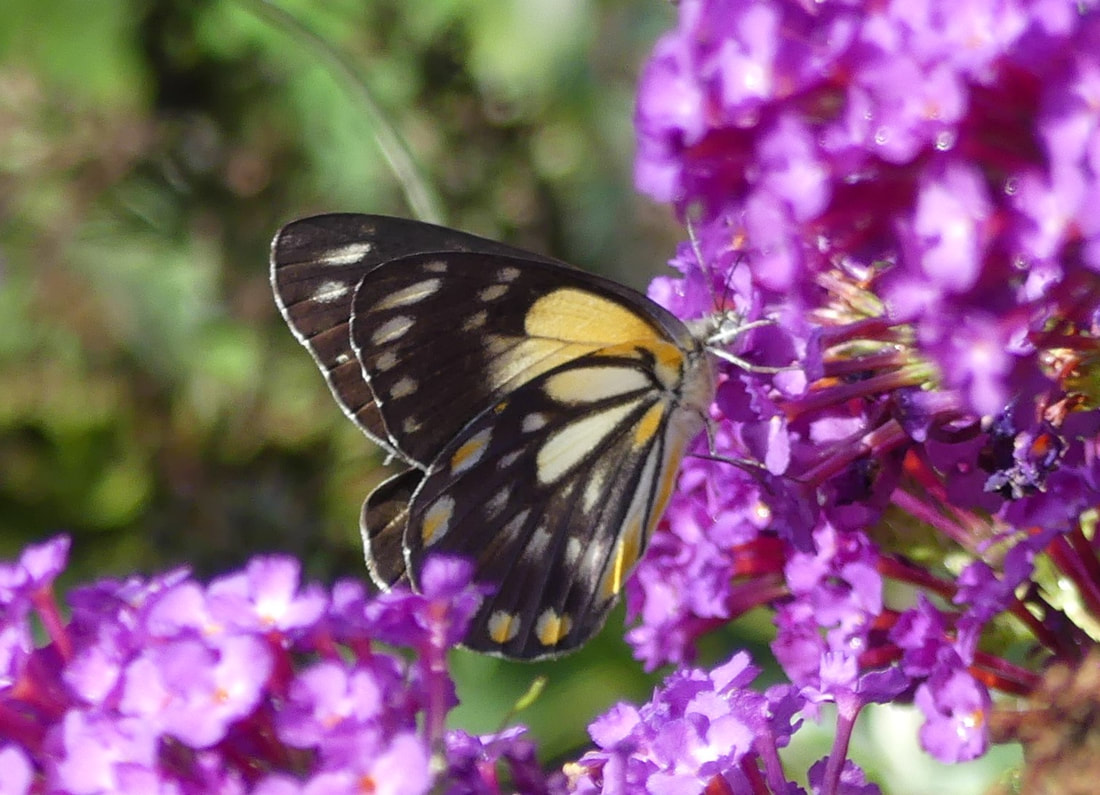 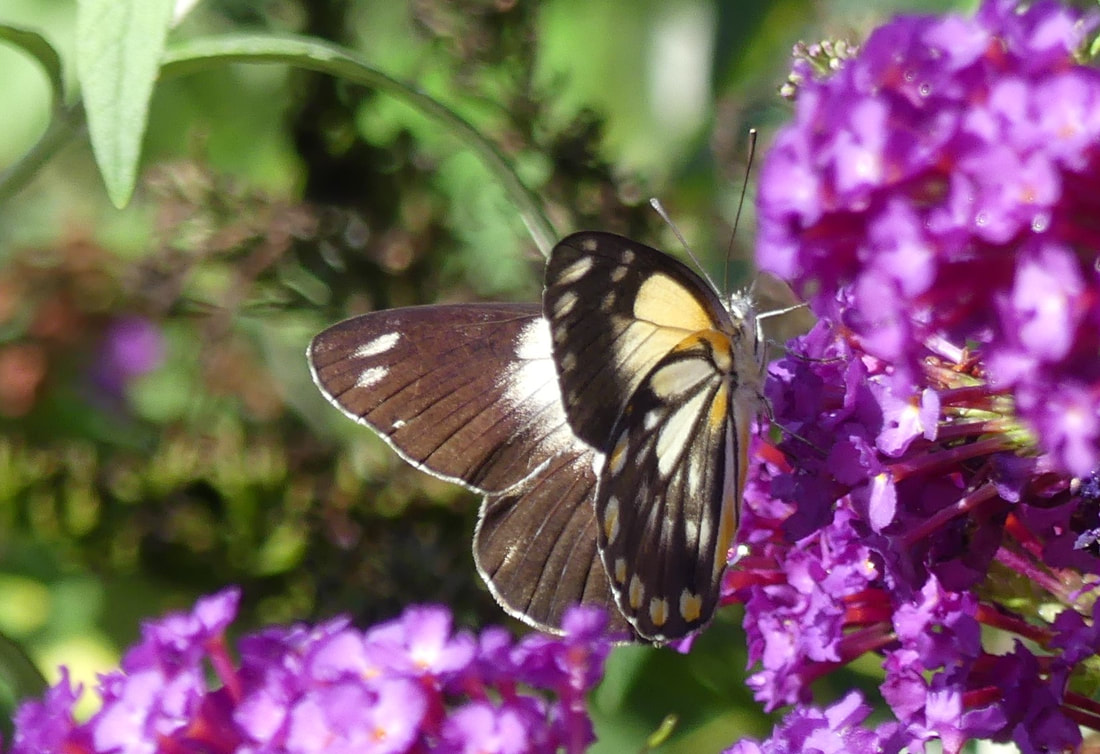 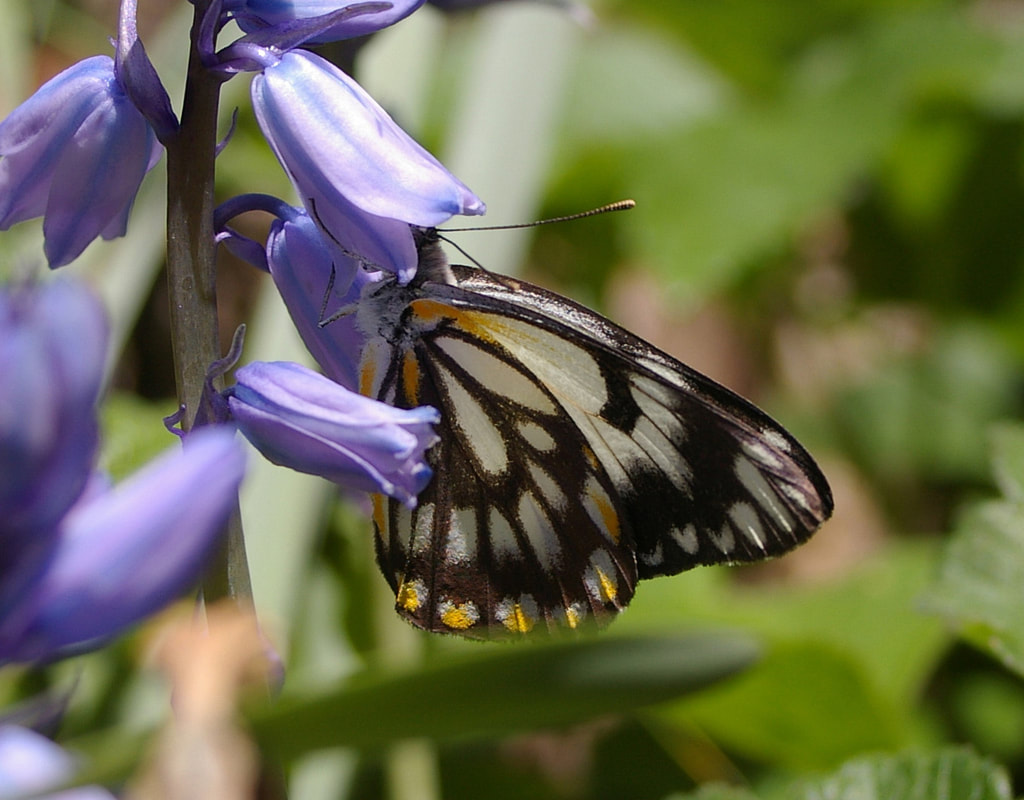 Caper White feeding on Spanish bluebells, 29 Sept 2007
Caper White butterflies are strong fast flyers, migrating great distances most years and usually not arriving here until September or October but occasionally not until early November. The one exception being their arrival here in August 2019.

Whilst driving north to Byron Bay in October 2005 Caper Whites were migrating in such large numbers it was like a snowstorm. Two weeks later back here on the Dorrigo Plateau large numbers were flying in a north westerly direction.

Another big migration here was during October 2007. That same migration was seen in Brisbane where an estimated 48,000 - 52,000 butterflies per hour were flying  in a 50 m wide stream from ENE to WSW (Hugh Dingle, Migration: the biology of life on the move).

In November 2015 we saw Caper Whites flying in Sydney and later that month in Urunga, they were flying from the south. A strong warm southerly wind was blowing and for some butterflies their wings had suffered damage.  We wonder how much further north they flew? Or were they being blown off-course by the strong wind?

Again in late October and early November 2016 very large numbers were migrating for more than a week here on the Plateau flying generally from the south-east towards the north-west. This was the first year that Caper Whites  deposited eggs on our small street side Capparis arborea tree. Eggs were deposited in groups mostly on the underside of leaves (they were white at first turning orange after a day or so).

Migrations also pass through Sydney where in the Sydney Botanical Gardens, on two large mature Capparis arborea trees, the caterpillars of Caper Whites compete in huge numbers with those of the Southern Pearl Whites for the limited supply of food.

In 2014 in Forestville, Sydney near the Capparis arborea tree we planted many years ago in our former garden, males were hovering around females perched high in the tree, prior to mating. Having mated the females laid their eggs in large batches on many of the Caper flower buds. ​They seem to find this tree each year now but the numbers in 2014 exceeded other years seen at this same tree.

Around 2010 we were shown a Citrus tree on the Dorrigo Plateau that was covered in yellow Caper White eggs. Larvae failed to survive feeding on Citrus. 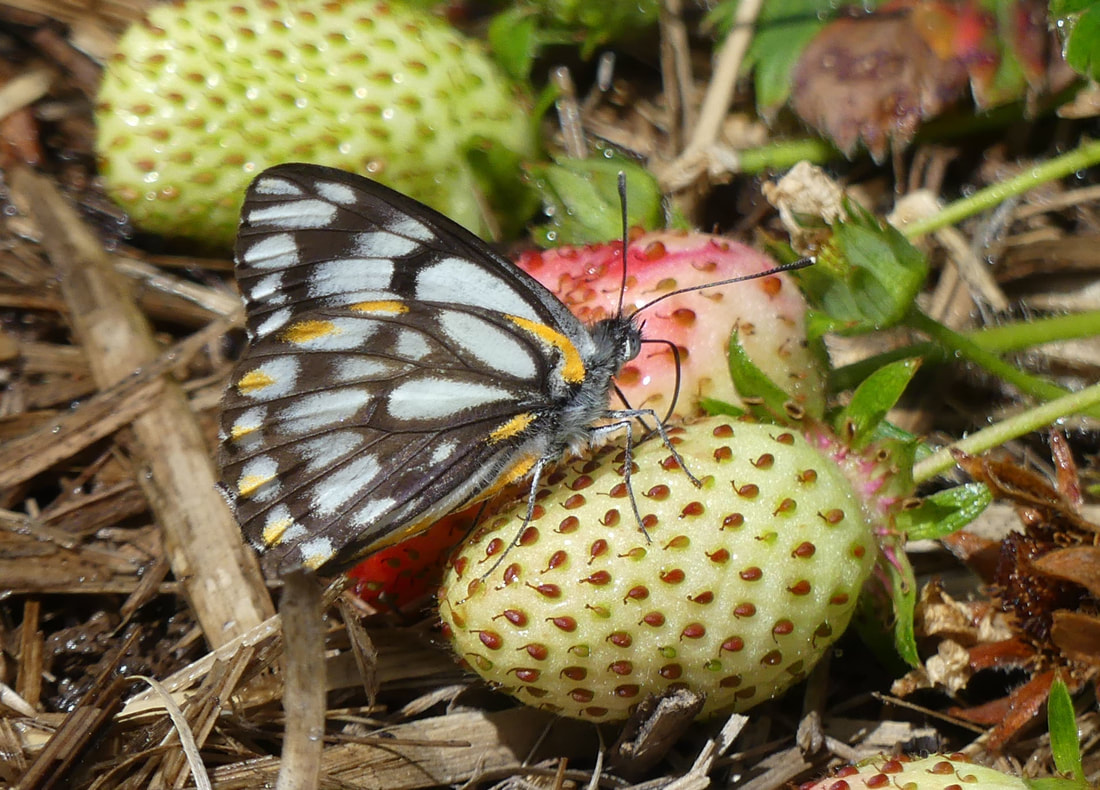 Larval Food Plants: Capparis arborea and other Capparis species
This butterfly can be found over much of Australia where various species of its foodplant occur. ​

During Summer 2019-2020  Caper Whites were common most of the time.
Our Caper White sightings this warm season have been almost continuous for about 5 months now - Nov to April.. Large Caper White migration (maybe 15-20 visible at a time) continuing to fly through Claire Cottage gardens between 30/11/19 and 06/12/19. later (Feb - April) Caper Whites were accompanied by Lemon & White Migrants.
On 30/11/19 Caper Whites Initially were moving in a northerly direction, a non stop stream of butterflies. On the later days the numbers reduced a little and the flight path changed to heading NW, each day they continued all day.
Now on 25/04/20 we are still seeing Caper Whites (dark form) feeding in the garden. Not migrating just slowly passing through. Days still warm, butterfly numbers good for late April - see new photo of female Hypolimnas bolina.
Over the years we have observed Caper White migrations on the Mid North Coast moving in Easterly, Northerly, North-westerly and Southerly directions. We have no understanding of what is going on and how each butterfly seems to know the chosen direction for that migration yet they can be hours or days apart on their travels. Magic?