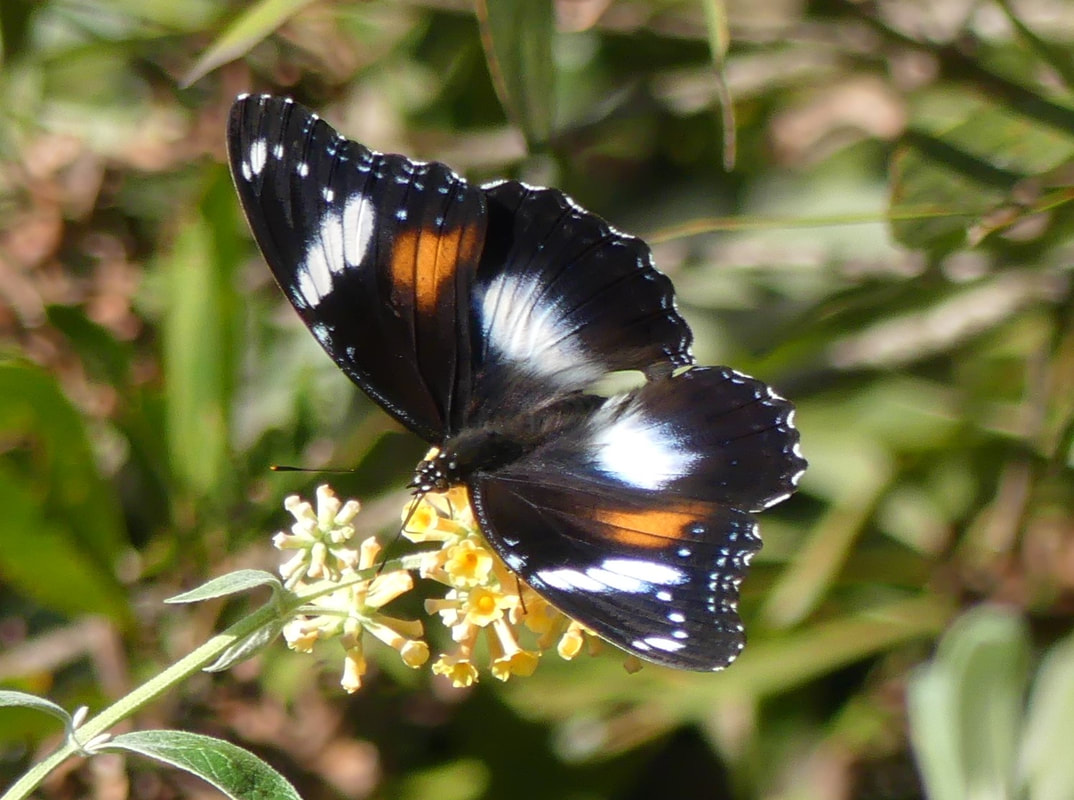 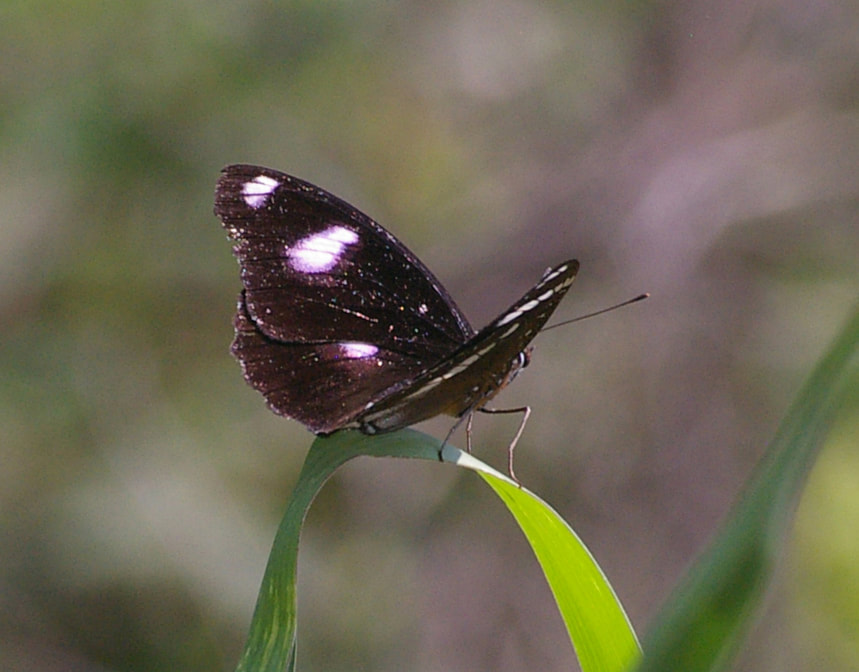 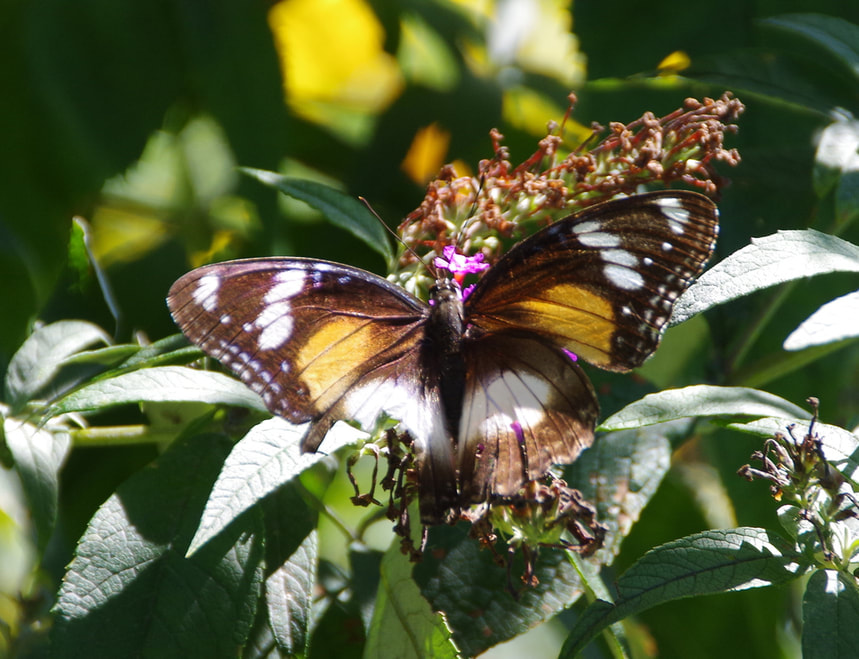 A worn Female Varied Eggfly blown into our garden by a strong westerly wind, 1 Feb 2016 2.39 pm
​We don't see this butterfly here very often.  It is more common down on the coast. At first, a seemingly uninteresting looking butterfly, but when the sun shines on the male's wings an iridescent blue shines around the white patches.

​The female looks different to the male - she has white and orange patches on her black wings and lacks the iridescent blue.​ 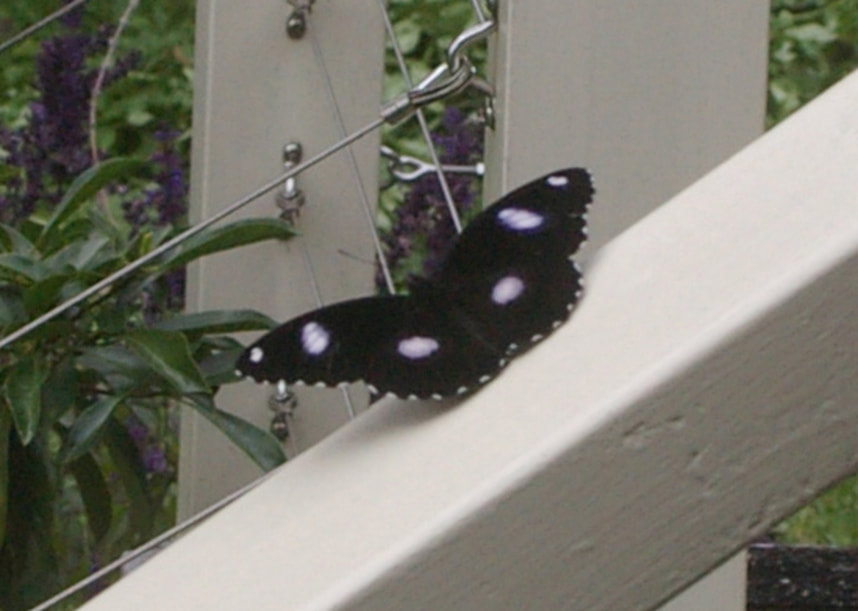 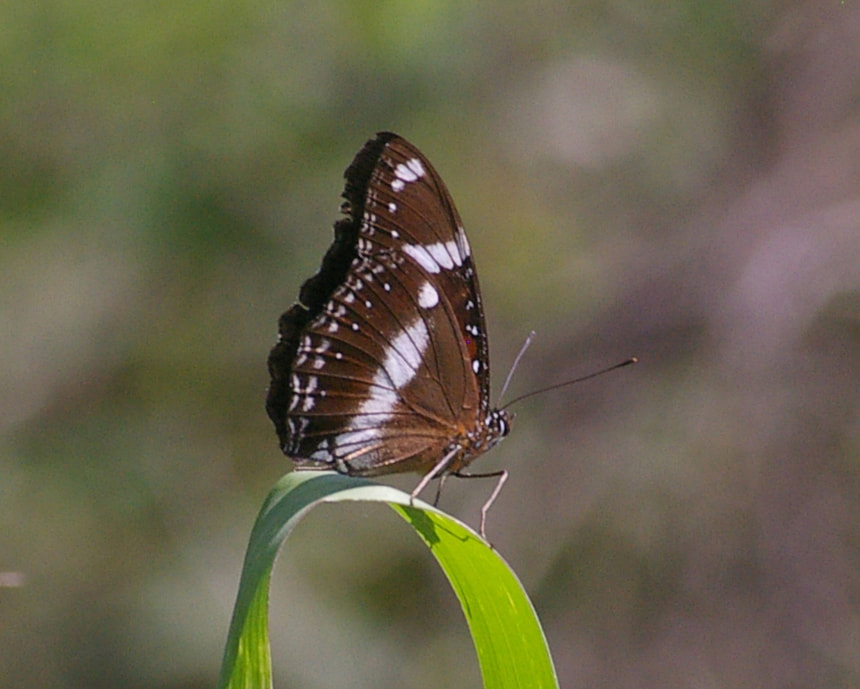 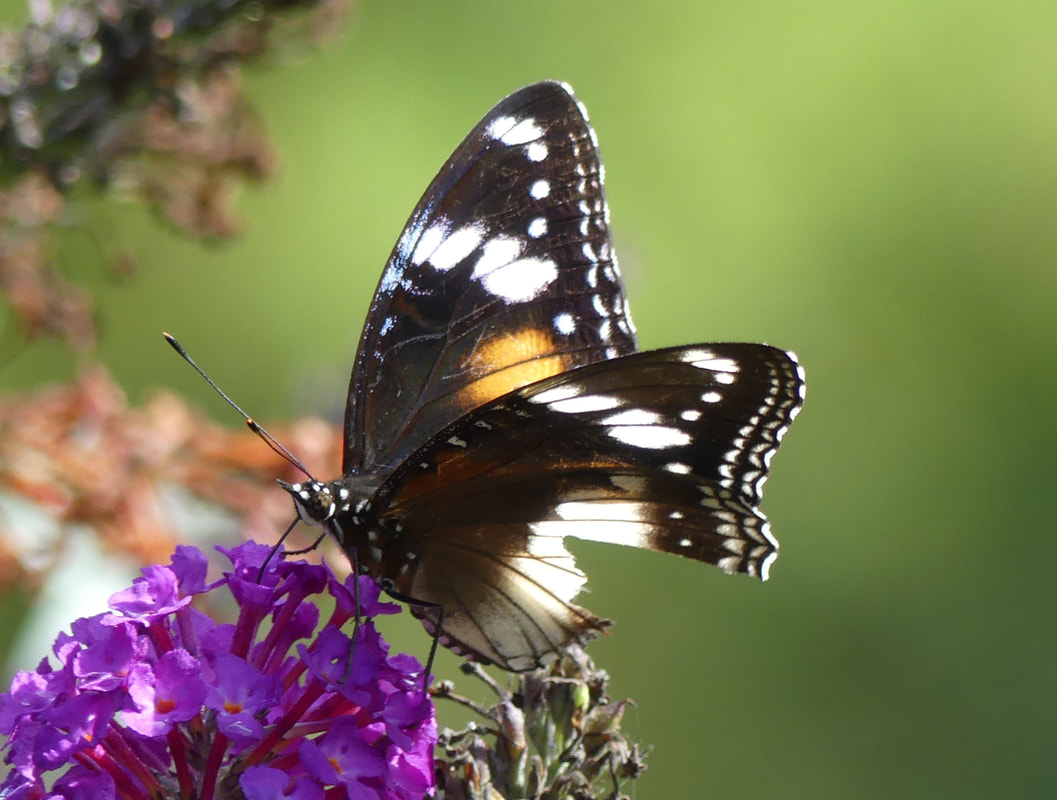 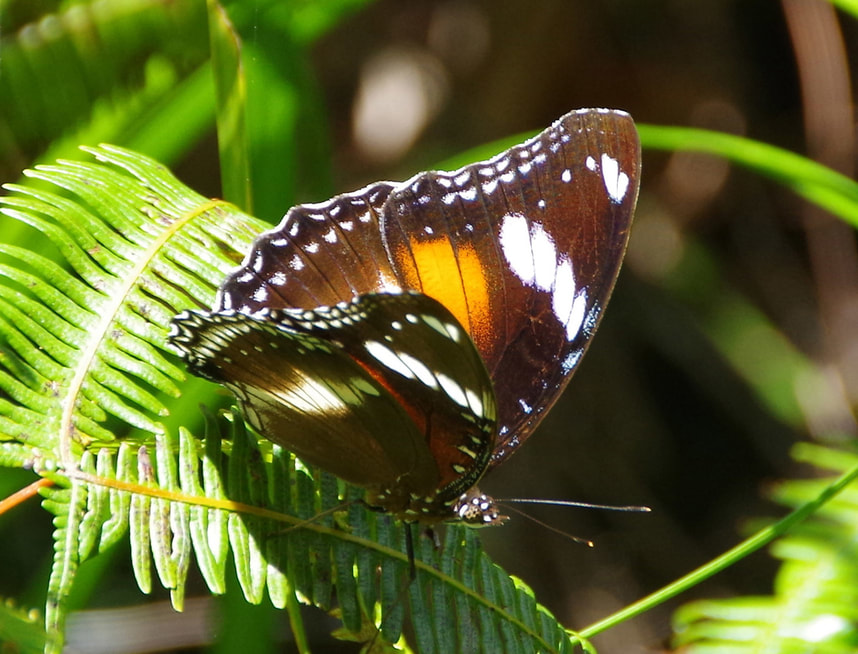 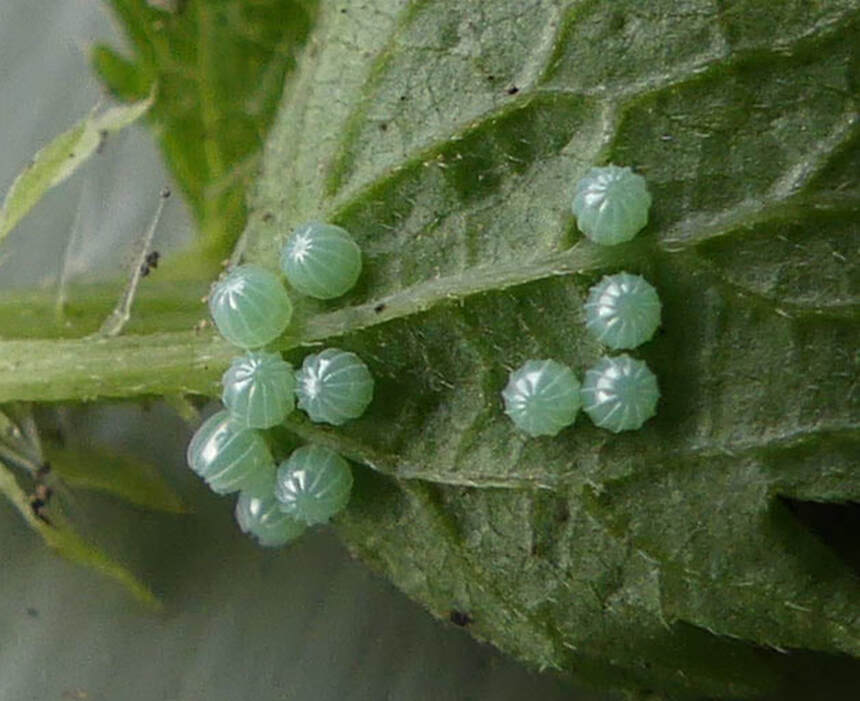 These eggs (13 in all) were laid by a fresh looking female on a small low-growing stinging nettle (Urtica incisa) and a fallen morning glory leaf (Ipomoea indica), Bellingen Island, Jan 30 2018 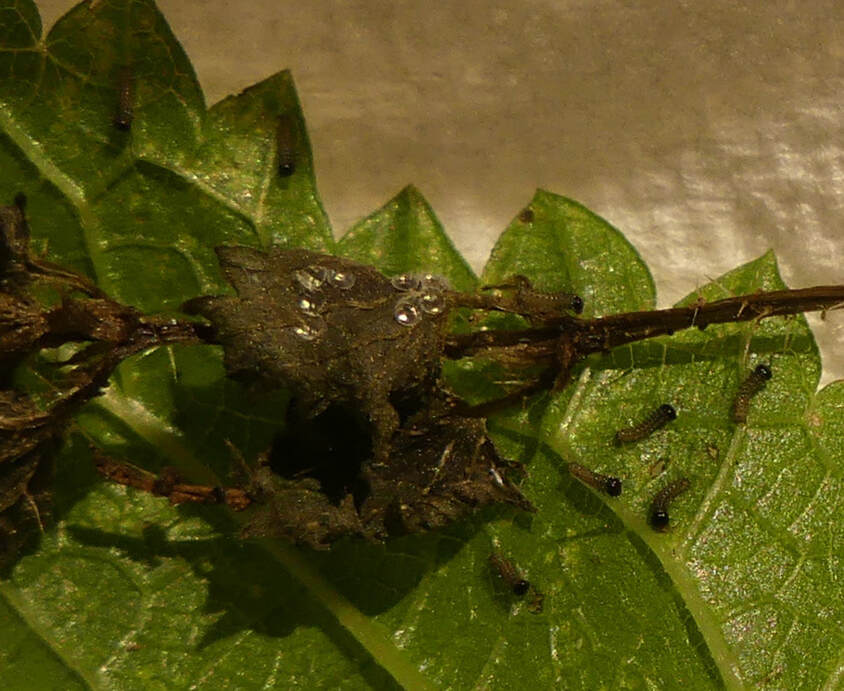 07/02/18 - Eight of the larvae that hatched on 6/7 Feb 2018. They measure approx. 1.5 mm.
The photo above (2 up) of 11 fertile Varied Eggfly eggs laid on Urtica incisa was taken on 30th Jan 2018. The female Eggfly also laid two eggs nearby on a fallen Convolvulus vine leaf. (13 eggs in total)
7th Feb - The eggs hatched over one night on February 6th / 7th. They took approx 7.5 days to hatch. Larvae began feeding on fresh Stinging Nettles (Urtica incisa) placed in their container just hours before their emergence. There was fresh Sida rhombifolia in the container as well. The Stinging Nettles were upside-down in the container and the 1.5mm larvae initially sat exposed to light to eat their first meal but then one by one moved to hidden locations. Eating was done within the leaf (ie not from the edge) and larva soon made small holes within the leaf. The Sida rhombifolia in the container had only one larva moving on it. However no eating was evident on the Sida rhombifolia after some 5-6 hours. In the photo of the new larvae it appears one larva is still emerging from its egg - top row 2nd egg from right.
9th Feb - After two days all visible larvae are feeding on Urtica incisa ( there is no indication that the Sida rhombifolia has been eaten at all). Looking at several larvae through a magnifying glass 48+ hours after emergence one can already see a difference in size, the larger ones (2mm+) looking far more healthy - hope this is not a sign of losses to come. Most larvae are out of sight under leaves so not able to check them all.
10th Feb - undertook a thorough search for larva when placing fresh nettles in the container. Could only locate 4 live larvae, and three pin head size dead bodies. Two larvae looking healthy, two poorly. There did not appear to be any other creature on the nettles that could kill larva.
11th Feb - only one larva continuing to feed - others appear to be dying. Suggesting - are the nettles the cause of the problem?
12th Feb - remaining single larva has moulted in to second instar.
13th Feb - the 2nd instar larva did not appear to eat following its moult and is dying - a very sad end. On this evidence one must assume Urtica incisa is not a food plant for the Varied Eggfly. 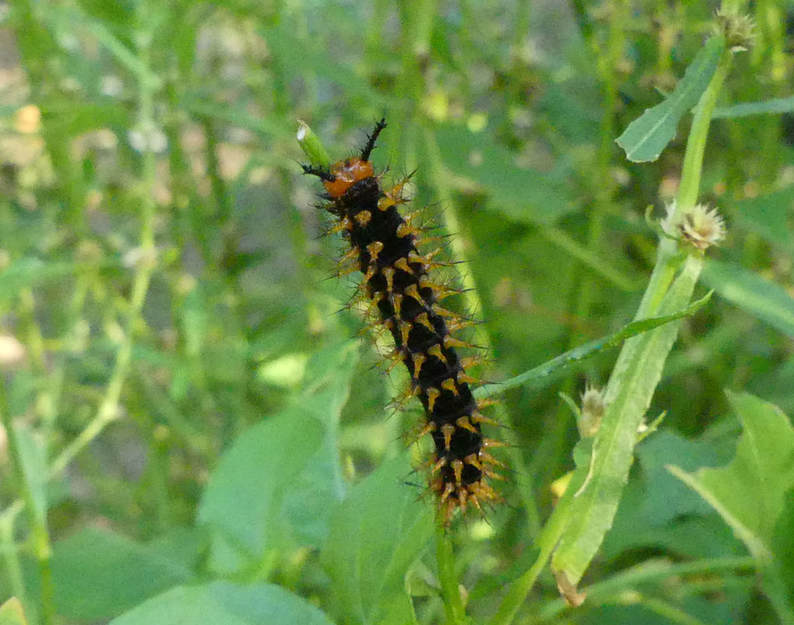