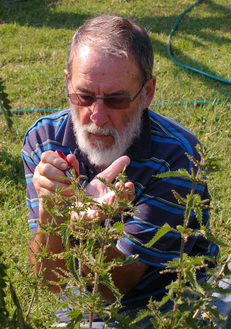 Trev tending Australian Admiral caterpillars
Trev: As a child amateur butterfly & moth enthusiast, living in a London garden-less flat, I had been interested in caterpillars since my very early years. I remember as a young boy in the late 1940's and early 1950's wandering the parks, streets and bomb sites of a war-damaged north west London looking for caterpillars, it was my small window to nature in a man made and often war-effected concrete jungle. Collecting with my younger brothers I would push the baby's pram around local streets with caterpillars that I had found, walking all over the pram. Luckily my caterpillars attracted a local adult collector who progressively introduced me more seriously to the lepidoptera world by imparting his knowledge whilst opening my eyes to the collections in the London Natural History Museum and the benefit of owning good books documenting the life history of the common UK Butterflies & Moths. At this early period in my life I also learnt how to correctly set and preserve butterflies and moths in a collection.

Carol:  My interest was first sparked in the early 1960's at the age of sixteen when I met Trev who had recently migrated to Australia without his family. I would join him on his street walks of our Sydney suburb looking over fences for signs of caterpillars to take home. When he went back to the UK for two years, he left me a batch of Emperor moth eggs. They eventually hatched and I remember Mum and I on hands and knees collecting dozens of tiny caterpillars from the four corners of the spare room and putting them on their food plant.

Ever since it has been a hobby we have shared together. I have had to get used to having caterpillars in the house on their food plant in jars or larger containers. Occasionally they have wandered and been found in odd places.

​Our photographic equipment is basic - nothing too flash - no huge lenses! Many of these photos were taken on our Pentax K50 with an 18-200 mm lens. More recently we have also used a Panasonic Lumix FZ300 with a 25-600mm lens. 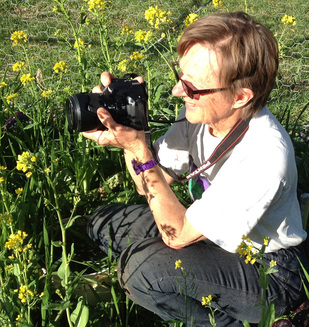 Carol and Pentax K50
​All the butterflies featured in this website, we have seen here. Whilst we seldom devote time to butterfly spotting alone we do try to have our camera within reach when working on the property so visiting butterflies can be photographed. Accordingly, our photographs currently do not record all the species that we have sighted as some disappear before we return with a camera.

Other butterfly species do or possibly may occur on the Dorrigo Plateau in either different micro-climates or vegetation types perhaps where their specific caterpillar food plants grow. We will list those with confirmed sightings under the Butterfly Gallery - in the Plateau Butterflies section. It is of course possible these butterflies may also visit your Plateau garden. 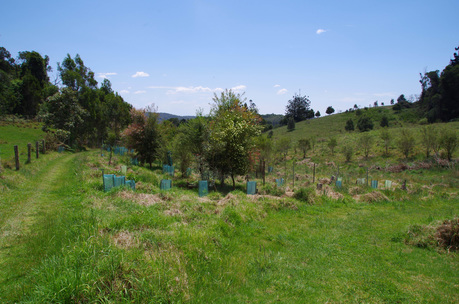 Regeneration in paddock Oct 2014
We moved to Dorrigo in 2001 and to our present home in June 2005.  We are lucky to live in a beautiful place. Our 8 hectare (20 acre) undulating property ranges from 790 metres to 840 metres above sea level at latitude 30.17°S. It is 10 km north-east of the town of Dorrigo and 60 km from the Pacific Ocean due west of Coffs Harbour and is close to equal distance from Sydney (550k) and Brisbane (450k).

The larger of the two paddocks, previously grazed by cattle, we started to regenerate and replant with rainforest trees in 2005, slowly at first whilst battling heavy winter frost and wallabies, both being causes of damage or death to young rainforest trees.

In February 2016, agisted cattle in our second paddock were finally removed and in November 2016 we began replanting it too whilst also allowing natural regeneration of rainforest to take place. We have been awarded a Government Grant to assist us to plant 650 trees to form a rainforest corridor from our rainforest remnants to the adjoining National Park. 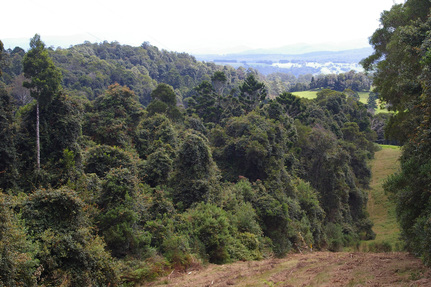 ​In addition to our two paddock areas we have two cleared zones under power lines which pass through our forested areas. In these zones we encourage native grasses, scaly buttons and scattered shrubs to grow. A colony of Xenica butterflies breeds in one zone and many other butterflies enjoy flying in these open corridors within the rainforest.

Our property is surrounded by privately owned rainforest, National Park and farming land. Larval food plants and butterfly nectar plants grow in the rainforest and in the house gardens.   In our gardens we have a mixture of ornamentals and natives, orchard trees and berries and vegetable tunnels where the vegetables and herbs are allowed to flower. We leave some weeds like Verbena to flower in our gardens and kikuyu areas to help provide nectar for the butterflies and other insects. We are always on the lookout for more butterfly food plants to grow on our property.

It is a diverse range of habitats for the native wildlife. 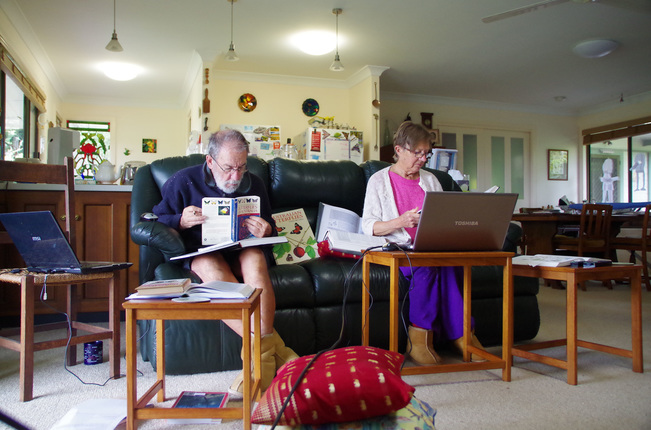 Identifying photographic specimens for the website surrounded by reference books

We are excited to be part of a conservation team, The Lepidoptera Conservation Group N.E. N.S.W., studying two endangered species, the Australian Fritillary Butterfly and the Southern Pink Underwing Moth, neither found as yet on our property.  The moth is found from Bellingen Shire north to southern Queensland. Unfortunately, there have been no confirmed sightings of the Fritillary butterfly since 2001.  It has never been a common butterfly and is very elusive.  Both insects have also been seriously affected by habitat alteration since white settlement commenced in 1788.
​
Powered by