An adult butterfly is the fourth and final stage of the butterfly life-cycle. Butterflies are an essential part of the ecosystem as pollinators and in each of their four life-cycle stages as components of the food chain for other wildlife.

The duration of each stage of the life-cycle may be affected by climate – as a general rule, the cooler the temperature the longer each stage will last.

Generally, this stage may last anything from a minimum of 3-4 weeks to about 9 months. It differs from species to species, and often depending on climate.

Caterpillars have a fixed-sized skin for each stage (known as an instar) of their development.  Unlike human skin, a caterpillar's skin does not enlarge as it grows. Therefore caterpillars have to periodically shed their skin to gain a newer larger one.  This normally happens four or five times during their development.   At the beginning of each instar the skin is loose, tightening gradually as the caterpillar feeds and grows, until it becomes tight again having reached maximum size for that instar.

When its skin becomes very tight the caterpillar spins a platform of web on a leaf or a branch and then sits completely still on that web platform for 2-3 days whilst its new skin forms beneath its current one.  When the new skin is fully formed the caterpillar changes instar's by breaking out of its old skin and emerging in the new instar displaying its new larger skin.  It will now also have a larger head and often brighter colours displayed on its new skin. The new skin needs to dry and harden before the caterpillar will move and resume feeding. They will often recommence feeding by first eating the skin they have just shed.

It is important not to move or touch the caterpillar whilst it is sitting motionless on the web platform growing a new skin. Its firm grip of the web with its old claspers is critical to ensuring it is able to break out of its old skin once its new skin is fully formed - it needs to apply pressure on the old skin around its head area. If you carefully observe the caterpillar over this period you will notice its new head gradually forming below its old one which is at the same time being slowly dislodged. The old head will drop off as part of the actual moulting process when the caterpillar walks out of its previous skin commencing the new instar.

At the end of the final instar the caterpillar will change into a chrysalis.

Chrysalises come in a variety of shapes and sizes and are formed in different ways for different species.

The caterpillar of the chrysalis on the left (below) had first spun a girdle of web around its middle and then fixed its hind end to the leaf with more web, so as to support its later change into a chrysalis.

In other species the chrysalis may be attached by a fine silk thread (cremaster) which enables it to hang down, as in the photo below right.  A few species pupate on the ground in a protected position in the leaf litter.

It usually takes from about 10 days to more than 9 months for the butterfly to emerge from its chrysalis, depending on the species.

​Depending on the species butterflies can live from about 2 weeks to as much as 9 months or maybe even more.

As with all creatures, a butterfly's driving instinct is to reproduce the species.

Male butterflies: Often they will emerge before females; the male's purpose in life is to fertilize females.

Female butterflies: Their purpose is to lay fertilised eggs on or near their foodplant so the next generation of caterpillars can hatch and develop into adult insects.

Both male and female butterflies need to feed to sustain their strength - the male to search for a mate and the female to deposit her fertile eggs. Unlike their caterpillars they do not eat leaves but feed on nectar, or moisture or rotting fruit. 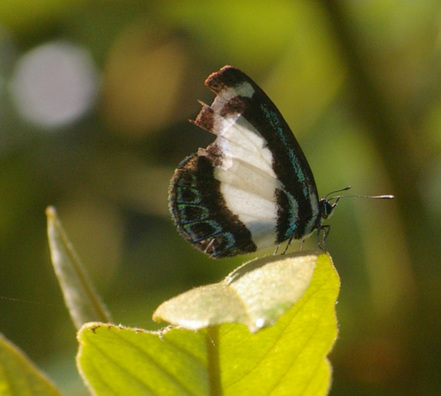 A Small Green-banded Blue that has probably been attacked by a bird but is still able to fly
​
​Birds, reptiles, small mammals and larger insects catch butterflies. Often they only get a mouthful of wing leaving the butterfly to escape to safety.

Some butterflies' wings are decorated with eye spots or tails to attract predators' attention away from their body.

Another form of defence some butterflies have adopted is to ingest poisonous chemicals from their caterpillar's foodplant to make them unpalatable.

Camouflage is a form of defence for some butterflies against predatory attack. This enables them in certain circumstances to disappear by blending into the background particularly when they close their wings.

Thank you to Viv Jones for her kind permission to use these amazing photos of nesting bee-eaters at Urunga and the butterflies they have caught to feed to their young. Bee-eaters nest in tunnels in the ground. 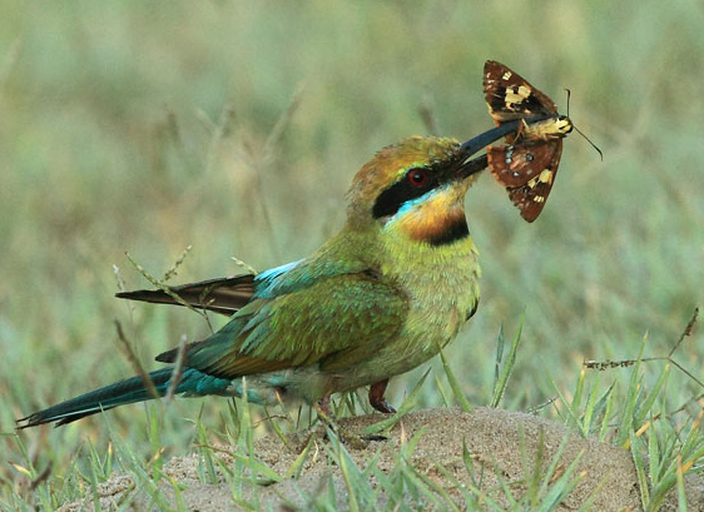 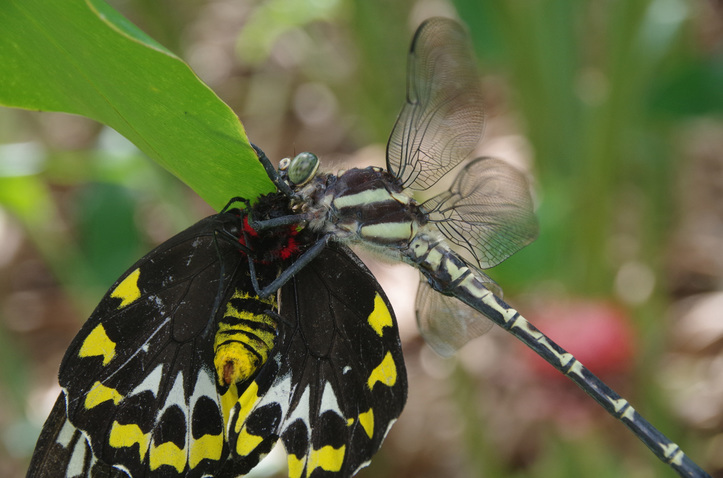 A dragonfly has captured a female Cairns Birdwing, the largest Australian butterfly, in Whyanbeel, Qld (Photo Wynne Robinson)
​Some spiders build their webs where flying insects including butterflies can be trapped. Others sit patiently on a flower waiting for an insect to land – these are two ways a butterfly can end up as a meal for a spider. 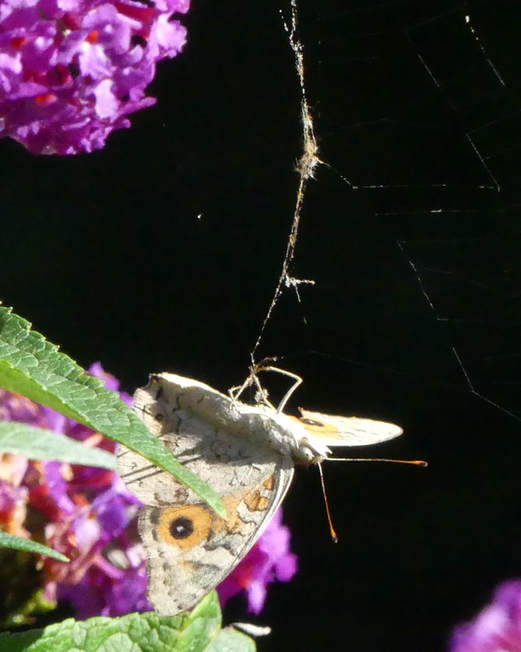 A Meadow Argus caught in a spider's web 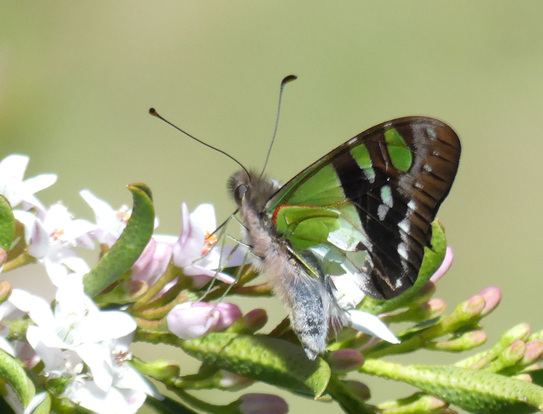 In early spring numbers of Macleay Swallowtail butterflies were feeding in our garden on Eriostemon and Forget-me-not flowers. Carol saw a grey fantail swoop on the one in this photo, taking most of its hindwings.

​The butterfly survived and could still fly quite well losing little of its speed. 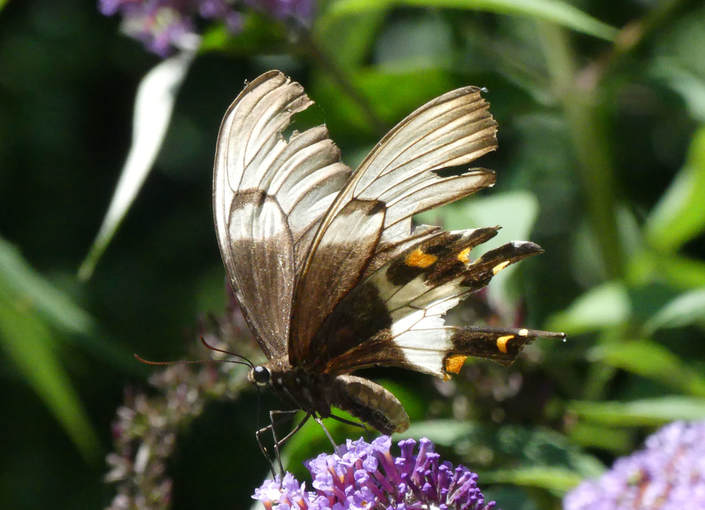 A battered Orchard Swallowtail after a hail storm, Jan 2018 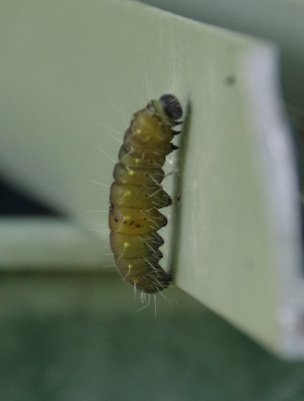 ​Parasitic flies and wasps are another threat to butterflies. They lay their eggs on or near a living caterpillar and their larvae then feed on the body of the caterpillar preventing it from developing into a butterfly.

Insecticide sprays kill all insects and can in turn harm other creatures that feed on them. Butterfly caterpillars do not kill plants, they merely prune them. If you leave them on your plants you will enjoy butterflies in your garden.

​As well as bringing enjoyment into our lives, both butterflies and moths are important in the food chain. They provide food for wildlife such as birds, reptiles, small mammals and other insects.

Humans have enjoyed butterflies for hundreds of years. There is something magical about them that brings delight to so many people.